AFC Emley 3-2 Wigan Robin Park
By James Grayson (Twitter: @jamesAgrayson)
Match Photos are HERE
AFC Emley chief Darren Hepworth hailed his captain Paul Sykes after his injury-time penalty capped a sensational finale to the FA Cup Extra Preliminary Round clash with Wigan Robin Park at the Welfare Ground.
Emley were losing 2-1 as the clock hit 90 minutes. Anthony Haigh equalised and the match looked set to be going to a Tuesday night replay at Wigan Robin Park.
But, Wigan captain Craig Haynes handled the ball in the penalty area in the 97th minute and 36-year-old Sykes kept his cool to slam home the spot kick and secure a tie with his old club Ossett Town in the Preliminary Round.
A jubilant Hepworth, a Arsenal supporter, raced onto the pitch to celebrate the equaliser and winner and he said: “I think that has just gone past Alan Sunderland scoring the winner against Man United for me on a personal level.

“That’s the first time I’ve won a game in the FA Cup and what a way to win, it was unbelievable. When it went 2-2, I thought we’ll take that and we’ll prepare for Tuesday night and go there (Wigan) and get a result.
“It was fairy-tale stuff. Ash Flynn was on penalties last season and of course he has moved on so Syko said to me ‘I’m good for pens so I’ll have them as I’m confident’. Since I appointed him to penalties we have not had one until the last minute of today.
“If I’m being honest I had all faith in him. I thought if you’re going to give it to somebody, you give it to the most experienced player on the park. He stepped up and didn’t let us down.
“It was totally Roy of the Rovers and he’s like a 21-year-old in the dressing room. He’s got a smile from cheek to cheek. He’s loving it and he’s an inspirational leader for us and that’s one of the reasons I asked him to come here. His leadership is first class and he’s been absolutely brilliant for us.”
Whilst the game ended with Emley on cloud nine, Hepworth’s men got off to a terrible start. Inside just two minutes, a Paul Cliff free kick had eluded Emley goalkeeper Danny Armitage and the North West Counties Premier Division side were ahead.

That was all Wigan had to offer in the first half as the home side dominated. But despite a number of attempts Emley could not score until the 31st minute. Brighton Mugadza headed Sykes’ cross back across goal and Alex Hallam was on hand to finish from 12-yards.
Doran Jordan and Liam Schofield both went close before half-time and with the second half looming, Emley were in control and a goal seemed imminent.
It took six minutes for the first goal of the second-half, but it was for Wigan – Cliff the goalscorer again. The strike was out of nowhere and totally against the run of play.
Wigan were happy and did not create much during the second half, but Cliff should have sealed the victory on 70 minutes when he broke through. The striker’s shot was weak and Armitage made an easy save – the miss would come back to haunt the visitors.
But an unfortunate defeat for Emley seemed on the cards as a host of chances were wasted or saved by Wigan’s goalkeeper Daniel Lever. 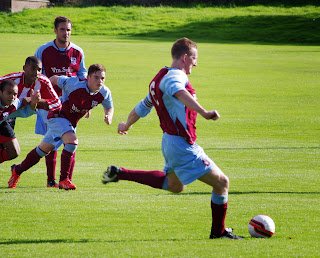 Lever had a fine game until one mistake which gave Emley their deserved equaliser. Lever didn’t properly connect and deal with Hallam’s cross which handed Haigh a tap-in from just in front of goal – the substitute couldn’t miss.

A small number of spectators exited after Haigh’s goal and missed the final twist in the tale. Haynes was the villain for Wigan and former Stalybridge Celtic and Harrogate Town man Sykes was the man of steel for Emley and he hit the penalty low and hard to complete a miracle turnaround and spark euphoric scenes.
Manager Hepworth added: “With ten minutes to go I hadn’t stopped believing and the players certainly didn’t.
“But, I didn’t expect us to win it. We deserved something out of the game, that’s what I believed and with ten minutes to go I would have taken a trip to Wigan on Tuesday night.
“(Until injury-time) we couldn’t put the ball in the net. We dominated possession and out of the two teams we certainly played the better football.

“I was thinking it would be cruel if we go out because we were the better team and we created the better chances. That doesn’t win you games because you have to put it in the back of the net.
“Fortunately we found two in the last few minutes.”

Man of the match: Paul Sykes (AFC Emley)
Posted by James Grayson at 20:49